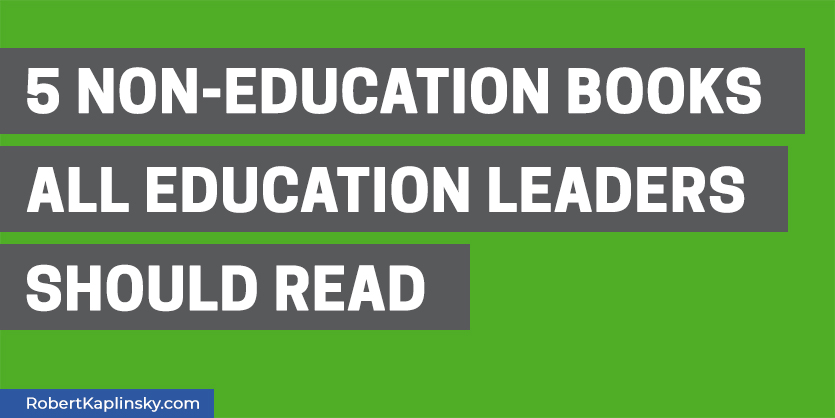 I love reading (and especially listening) to books that help me learn new ideas or realize how what I thought I knew was wrong. I think this is especially important for anyone responsible for leading or inspiring others. I especially love stories and metaphors that I can think about and incorporate into my presentations and share with others.

So, I want to share five of my favorite books with you that continue to powerfully affect what I do.

Nudge
What if there was a way to make seemingly trivial changes that had a huge impact on how people acted? That is what I dove into in Nudge by Richard Thaler and Cass Sunstein. Richard Thaler actually won the Nobel prize in 2017 for the behavioral economics research he shares in this book.

To better explain what I mean, let’s consider the important goal of increasing how much money people save for their retirement. The less people have, the bigger impact it has on the individual, their family, and society. Many employers offer retirement planning, but many employees do not take advantage of them. So, how do you increase participation rates? Radio ads? TV commercials? Conversations with advisors?

How about something trivial like changing the way the checkbox is set up on their paperwork. Consider these two options for when a new employee is hired:

In a completely rational society, both of these choices should have the exact same results because you either want to participate or you don’t, and choosing what you want takes very little effort. However, behavioral economists have found that this isn’t what actually happens. What they found was that when people aren’t sure what to do, they tend to not change anything. So, a statistically significant increase in participation happens when it’s presented like the second option.

Imagine what might happen if you apply these techniques to what you do! I’ve written up a whole series of 10 blog posts on these ideas, but as a quick example consider how optional professional development is run.

I’ve seen it where teachers can choose to go if they want to, but what if instead of opting in, everyone was enrolled in the professional development by default, and they could choose to opt out. In theory, the end result should be the same because those that want to go will go and those that don’t won’t. In practice, you’d have a lot more people attending professional development and getting more expertise.

There are so many more examples like this in the book. I’ve found this to be fascinating and provide very interesting insight into strategies groups can use to “nudge” others towards a specific action.

Essentialism
If you feel overwhelmed by your to-do list, like you’re barely treading water and surviving, then you will love Essentialism by Greg McKeown. Michael Fenton gave me this book at a time when I had really lost my way. Basically, I had committed to so many engagements that I was either physically away doing a training or mentally away because I was in my office working, far more than I wanted. I felt like I was on a runaway horse with no clue as to how to reign my life back in.

Essentialism provided me with hope and a path forward. Here are two of my favorite takeaways:

Outliers
One of the most common myths is that hard work is all it takes to be successful in life. I know I’ve worked very hard to be where I’m at, but Outliers by Malcom Gladwell, does such a good job of helping me see all the luck I’ve had as well. Consider the impact of each of these factors.

I could go on and on, but I think that Outliers does a great job of dispelling the hard work myth. It’s helped me look for other factors that are holding people back (so I can work to remove barriers) or helping people grow (so I can figure out ways of replicating it). I think that leaders have an obligation to think about these other factors and what we can do about them.

Tipping Point
Tipping Point’s whole purpose is helping you understand why some ideas gain traction while other ideas begin with promise and then fade away. This is critical for educators because we’re in an industry where we can’t really force people to do much, so everything we can learn about why some ideas go viral and others don’t is worth learning about. I enjoyed so many parts of this book, but here are two I love.

First, I enjoyed his breakdown of the Law of Diffusion of Innovation which I might have had some intuition about but not real understanding. Consider this visual representation of the law. 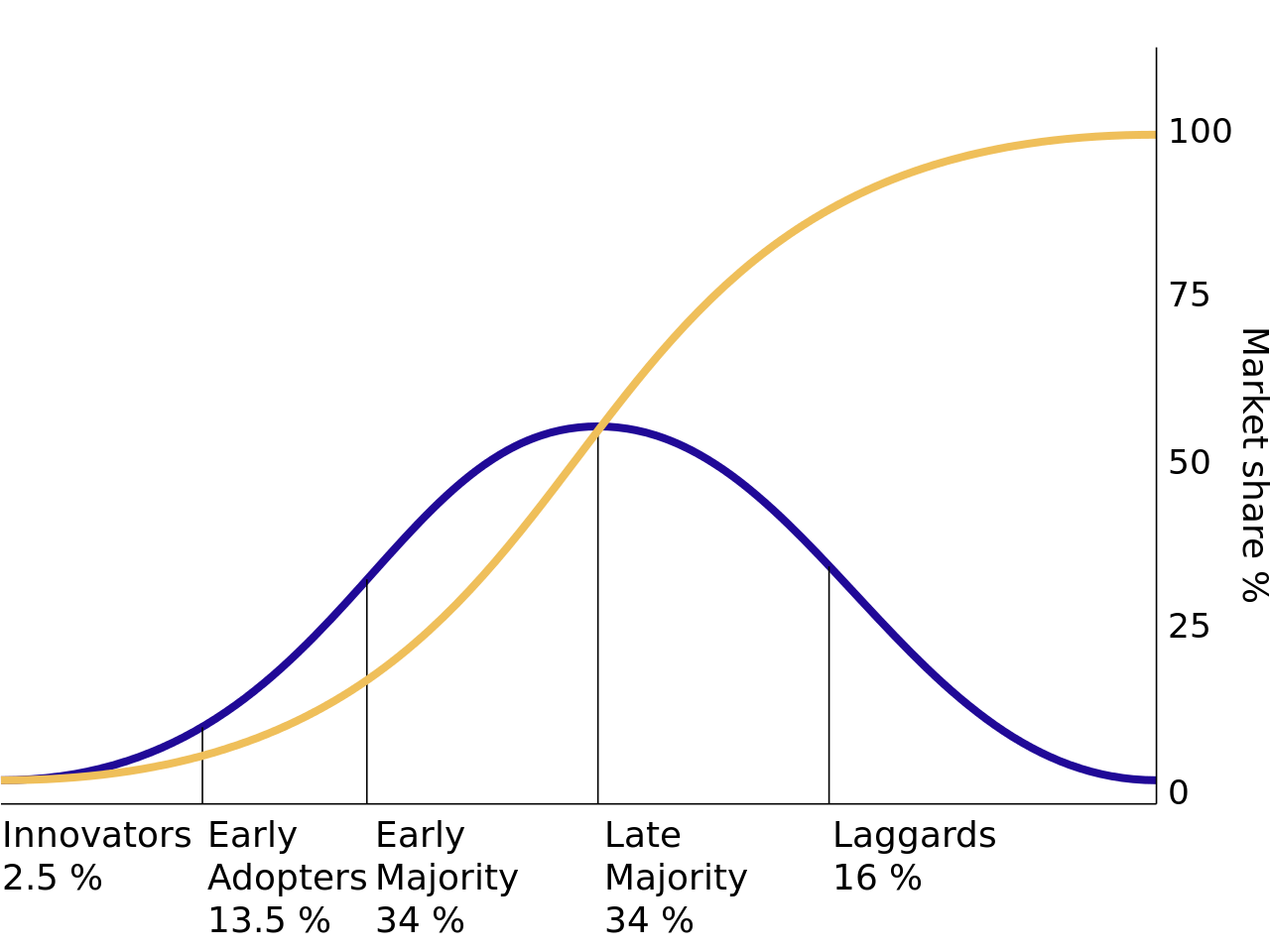 You can see how very few people buy into an idea initially. Those people are innovators who are the first to try new trends. Then it gains traction and you have the early adopters who may have seen what the innovators did and jumped on board. Then you have the early majority who feel much safer joining in, and by this point the idea tips and you’ve got 50% of the people. Then you get the late majority that follows and eventually the laggards.

As an example, think about electric cars. There were probably people driving them 15 years ago, but it was not very common. We’re probably now in the early adopters phase where it’s no longer strange to buy an electric car… but it’s also not necessarily commonplace either. Eventually it will tip and it will become more unusual to buy a gas powered car than an electric car. It will take much longer though to get everyone on board.

Second, I liked how he talks about mavens, connectors, and salespeople. He explains that you need all three kinds of people for an idea to catch on, or tip.

When you have all three, it makes for a potent combination where you know what’s good, can convince others of why they want it, and are connected to everyone so it’s easier to make it happen.

In practice, I’ve found this information useful to know but hard to implement. For example, when I created #ObserveMe, I could tell when it was in the Innovators and maybe the Early Adopters phases. After a year or so, it became really hard to tell where exactly it’s at. For example, I can’t tell if we’re still in the Early Majority phase and still growing or in the Late Majority phase and it’s cooling off.

Made to Stick
It was hard choosing only one book by the Heath Brothers, so I chose Made to Stick because I think it’s an essential read for anyone who wants the content they share to be understood, remembered, and have a lasting impact.

They share six attributes of sticky ideas and the attributes can be interpreted and applied through so many lenses. For example, presenters can try and incorporate these ideas in their presentation so that what they share is not forgotten. Similarly, teachers can take their framework and apply it to what they teach so that students remember as well. If fact, my 6 Signs of Unforgettable Lessons presentation is based on how to apply the principles of Made to Stick to math education.

Conclusion
It was really hard for me to narrow this list down, but I hope one or more of these sound interesting to you. Any others you’ve read that you think I’d like too? Have you read any of these and want to add something to my description? Please let me know in the comments below.
Share This
If you think others need to see this, share it on one of the sites below by clicking on the button.