How I Began To See Systemic Racism 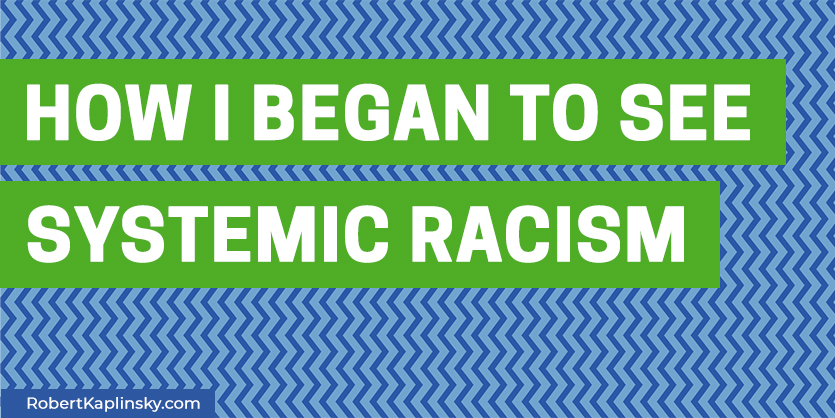 Who Am I Writing For?
I am writing this blog post for the earlier version of myself who naively thought that “not seeing color” was a sufficient social justice perspective and wishes he could have realized how inadequate that was. I’m also writing this for other white people who see the injustice in the world and want to do more.

I am not an authority on social justice. What I’ve written has been influenced by so many people, but much of it can be traced back to Val Brown and the #ClearTheAir movement she founded.

How I Began To See System Racism
I listened to the book White Fragility by Robin DiAngelo in early 2019 as part of my desire to better align the values I claim to have with my actions. I learned about the book from the recommended readings of the #ClearTheAir chats on Twitter (which I highly recommend checking out if you want to learn more about social justice). I gained a lot of perspective from the book including how even though I did not create the structures that privilege white people*, I still benefit from them and if I truly believe in equality, it’s my responsibility to help level the playing field.

My favorite part though was Marilyn Frye’s metaphor about how a birdcage represents oppression. It blew me away at how elegantly it helped me understand structures like systemic racism, which was a term I had heard but did not understand.

The book has a slightly different version of the metaphor below, but here’s what Frye shared in her book Politics of Reality: Essays in Feminist Theory. Please read it and then continue below.

Consider a birdcage. If you look very closely at just one wire in the cage, you cannot see the other wires. If your conception of what is before you is determined by this [narrow] focus, you could look at that one wire, up and down the length of it, and be unable to see why a bird would not just fly around the wire any time it wanted to go somewhere. Furthermore, even if, one day at a time, you [closely] inspected each wire, you still could not see why a bird would have trouble going past the wires to get anywhere. There is no physical property of any one wire, nothing that the closest scrutiny could discover, that will reveal how a bird could be inhibited or harmed by it except in the most accidental way. It is only when you step back, stop looking at the wires one by one, microscopically, and take a macroscopic view of the whole cage, that you can see why the bird does not go anywhere; and then you will see it in a moment. It will require no great subtlety of mental powers. It is perfectly obvious that the bird is surrounded by a network of systematically related barriers, no one of which would be the least hindrance to its flight, but which, by their relations to each other, are as confining as the solid walls of a dungeon.

Let’s think about this metaphor through the context of systemic racism. Each wire represents a single structure that hinders people of color. To illustrate what I mean, here are just two examples of wires:

Hair Styles
Imagine being discriminated against for your hairstyle. I can’t imagine someone coming up to me and telling me that they won’t hire me because of my hairstyle. Yet, it’s so much more common for black people that California had to pass a law prohibiting this kind of discrimination. From the article:


“However, there are still far too many cases of black employees and applicants denied employment or promotion — even terminated — because of the way they choose to wear their hair,” she said. “I have heard far too many reports of black children humiliated and sent home from school because their natural hair was deemed unruly or a distraction to others.”

Still think it’s hypothetical? What about this time when a high school wrestler was forced to cut his hair at the wrestling match if he wanted to participate. This is one wire.

Coffee Shops
I cannot count how many hours I’ve spent sitting at coffee shops, working on my computer. I also don’t drink coffee. I just sit there and use their space, electricity, and WiFi. So, when I saw that two black men were arrested for waiting for someone they were meeting at a Starbucks it shocked me. From the article:


The men had initially asked to use the bathroom at the Starbucks on April 12 as they waited for a business meeting, but were told it was for paying customers only. They then occupied a table without making a purchase, which many observers have noted is a common occurrence at the franchise’s locations.

Within minutes of them arriving, a manager called police after the men declined to leave the premises because, they said, they were waiting for their acquaintance.

I’ve done this same thing so many times, and I realized that it would never happen to me because of my skin color. This is another wire.

If there were just a dozen of these wires, maybe some birds could escape. Sadly, there are more wires than I can count and as a white male I have come to realize that just because I can’t see the wires, it doesn’t mean they’re not there. I know that for myself, I’ve had a hard time grasping systemic racism because I only saw the obvious wires and examined them one at a time.

If you see yourself as an ally, then I encourage you to take a step back, examine all the wires you’re aware of, and try to learn as much as possible about the wires you haven’t noticed yet. The more we’re aware of them, the more opportunities we’ll have to dismantle them.

Next Steps
You might be wondering what I plan to do next or, similarly, what you could do. Personally, it’s taken me decades to realize how biased my understanding of history has been. So, I plan to do more learning and listening.

If you’re looking to learn more, here’s what I recommend:

Here are some powerful shows I’ve watched that have provided a lot of perspective:

I’ve also learned so much by making more real friendships with people of color and just listening. I’m not saying that once you have a friend who’s a person of color, that you’ve done enough. It’s just the beginning. I really had no clue what people whose skin color was not like mine were going through. Many of my friends have endured hardships I couldn’t even imagine. By hearing their stories, it helps me sympathize and better see how the wires form the cage. They also call me out when I mess up. I appreciate this because it means that they believe that taking the time to help me understand is worth it.

Finally, I want to thank Lybrya Kebreab, Marian Dingle, and Kris Childs for their friendship and for making time to help me strengthen and solidify my writing.

P.S. Why Am I Writing This?
If you’re a long time reader of my blog, you might be wondering why I’m talking about systemic racism and not just sticking to math. The reality is that the more I learn about how common injustices are, the more I realize that I cannot sit back and do nothing.

It reminds me of the quote from Dr. Martin Luther King Jr. who said, “Our lives begin to end the day we become silent about things that matter.” So, I’m writing this post for anyone who, like me, considered themselves an ally, only to realize that they were not doing enough.

I thought I was doing enough by finding ways to support others. But I’ve come to realize that I was wrong. Looking at the image below may make you feel uncomfortable because like me, you may not want to think you are the least bit racist. 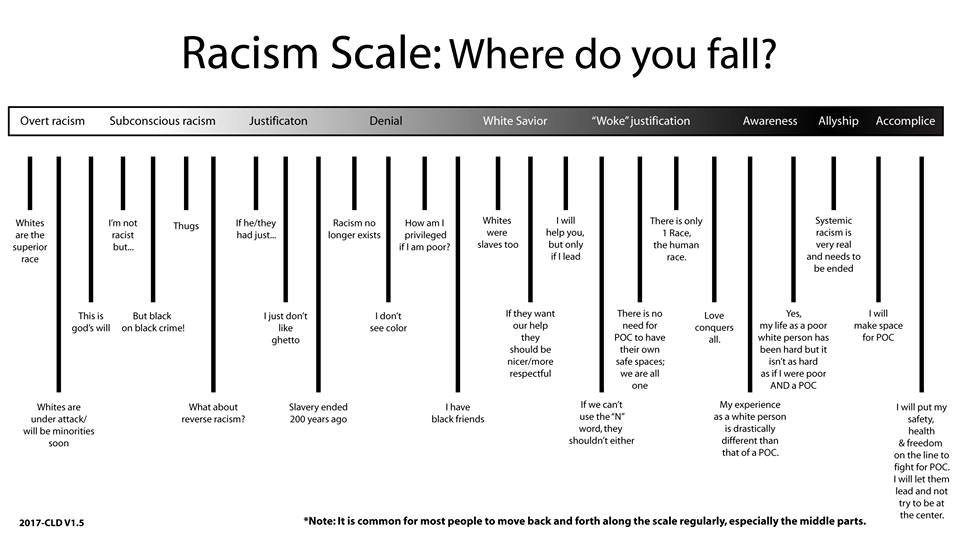 However, when I first started taking social justice seriously, I was probably at “There is only one race, the human race” on the spectrum. I didn’t realize that my own personal beliefs did not change the reality that people of color had experiences that were far different than my own. I’m now working hard on moving towards the right on this spectrum. I am definitely not all the way there, but I’m now trying to be anti-racist by calling out racism and doing what I can to mitigate it.

To be clear, this blog post has pushed me far outside of my comfort zone, but I think that’s part of the point. As a white man, I have the privilege of choosing whether or not I want to push back against racism. For people of color, they don’t get that choice.

I do not claim to have it all figured out and I’m certain I’ll later realize I’ve said something poorly in this post. I’ve also tried just waiting for things to get better and that’s not working either. So, thank you in advance for calling me on anything I got wrong and for helping me grow even more.

* Don't Think White Privilege Exists?
If you disagree with me and believe that everyone already has a level playing field and that structures which benefit white people don’t exist, then please consider this thought experiment that I learned about when Kory Graham shared a Twitter thread from Val Brown. In her thread, she shared a portion of an essay written by Gloria Ladson-Billings who describes an exercise Andrew Hacker ran on his college students in 1992. Here’s a portion of what she shared:

Hacker uses a parable to illustrate that although the students insist that “in this day and age, things are better for Blacks” (p. 31), none of them would want to change places with African Americans. When asked what amount of compensation they would seek if they were forced to “become Black,” the students “seemed to feel that it would not be out of place to ask for $50 million, or $1 million for each coming Black year” (p. 32).

And this calcualtion conveys, as well as anything, the value that white people place on their own skins. Indeed, to be white is to possess a gift whose value can be appreciated only after it has been taken away. And why ask so large a sum? …. The money would be used, as best it could, to buy protection from the discriminations and dangers white people know they would face once they were perceived to be black. (p 32)

Think about what this means! First, if you ever wanted to quantify how much white people value being white and not black, then here you go. If this data is representative of white people as a whole, then saying that there is no privilege to being white is just lip service. You’d expect this amount to be $0 if the people surveyed felt their skin color provided no value. Second, how bad were things for Black people if things are better than they used to be and still they’d want millions!