No One Is A Prophet In Their Own Land 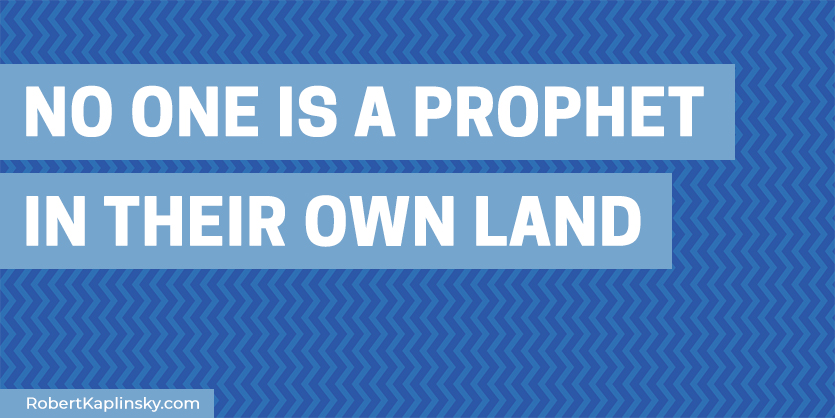 If you’ve ever felt like you don’t get the attention or respect you deserve from the people who know you well, you’re not alone. Maybe you’ve even heard the saying that no one is a prophet in their own land? The phrase has it’s origins in Luke 4:24 meaning that this phenomenon is by no means new. The basic idea is that people take for granted the things they’re familiar with.

This can take many forms including when you tell a loved one about a restaurant you want to go to, only for them to dismiss you. Then, later that same loved one may come back telling you about how they want to go to that same restaurant because their friend told them it was great. If you’re laughing because this has happened to you, you’re not alone. It’s so common that we’ve all probably experienced one or both sides of it yet, yet it can be exceptionally hard to defeat.

Applications in Education
The same thing frequently happens in education when one educator tells another about a new idea or strategy. Sometimes it may feel like the idea or strategy gets dismissed before the sentence is complete.

It can drive you bonkers because you’re pretty sure that what you’re sharing is worthwhile, if you’d only be taken seriously. It can sow seeds of doubt that make you question whether others are right for not taking you seriously. Believe me, I’ve been there.

Unfortunately, I don’t have a magic spell to make this reality go away. However, I do have a couple pieces of advice for you:

Conclusion
I hope that me sharing this helps you realize that you’re pretty normal for feeling this way. I’m not saying that it should make you any less frustrated. Just that you’re not alone.

If this has happened to you before, I’d love to know what saying you use to describe this phenomenon or any other suggestions you have for defeating it. Please let me know in the comments.