If you are frustrated that your students will try a math problem once or twice and then give up, this blog post is for you.  Let me (re)introduce you to one of my favorite tools for helping students persevere when problem solving: the Open Middle Worksheet.

To explain why many educators find it invaluable, I’ll need to tangent and briefly explain a central theme of one of my favorite books, Freakonomics.  Life is all about incentives.  There are positive incentives (I go to the gym because I want to stay healthy) and negative incentives (I don’t steal because I don’t want to go to jail).  Without these incentives (or if the incentives changed) what you do would change.

So, what are students’ incentives in mathematics?  Unfortunately, American math students are too often rewarded for completing math problems as quickly as possible using as little energy as possible.  Accordingly, with those incentives it makes sense to quit trying if students think they can’t solve a problem.  This is no good because it takes a fixed mindset approach and does not encourage students to learn and persevere. In contrast, in English the incentives are set up to reward a cycle of gradual improvement through rough drafts that lead to final drafts.  Why can’t we have something like that in math?

This is where the Open Middle Worksheet (shown below) comes in handy.  The front side has a space for the student’s name as well as their first, second, and third attempts.  The back side has spaces for their fourth, fifth, and sixth attempts.  Each attempt has three components:

The worksheet is designed to set students’ expectations such that problems may take six (or more) attempts to complete.  When I use this worksheet with students, I tell them, “I really hope you don’t get the problem right on the first attempt.  If you do, then you’ll only be able to earn a maximum of four points: two for the attempt and two points for the explanation.  I really hope it takes you at least three attempts so you can earn more points.”

Think about how the incentives have changed by introducing this structure!  Instead of rewarding students who complete the problem as quickly as possible using as little energy as possible, now students are rewarded for a cycle of attempting problems, reflecting on what they learned from their mistakes, and improving their strategy.

This has worked wonders for me and has led to my absolute favorite piece of student work ever (shown below).  This is from an 8th grade student who solved this problem:

What is the greatest area you can make with a rectangle that has a perimeter of 24 units?

On her first attempt, she struggled so much that she couldn’t even construct a rectangle with the correct perimeter.  Prior to using this worksheet, that would have been both the beginning and end for a student working on this problem.  Thankfully this student wanted to earn more points so she continued on.  On the second attempt she was able to construct a rectangle with the correct perimeter and by the third attempt she was experimenting with greater side length values. 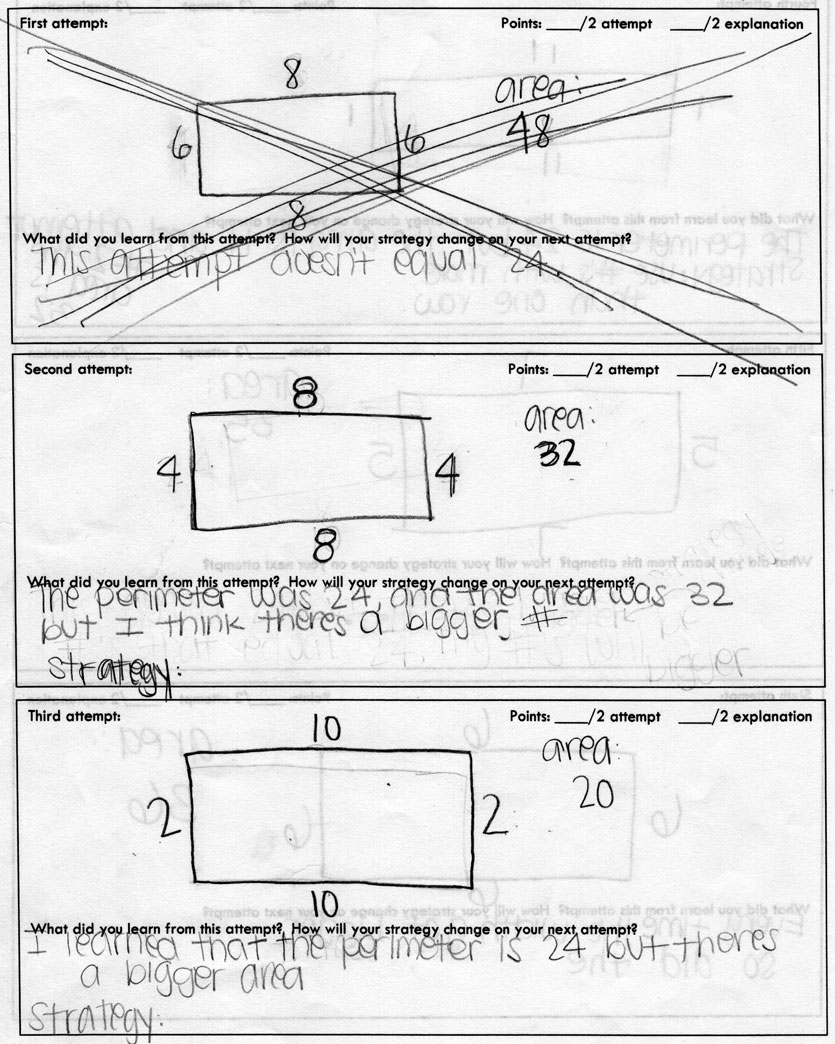 By the fourth attempt, it became apparent to me that while students had procedural understanding of area, they had gaps in their conceptual understanding.  They could not visualize what 1 row of 11 square units looked like versus 2 rows of ten square units.  So, we came together and had a conversation about it.  With this understanding established, she realized she would give up an extra column to have another row and finally arrived at the answer by her sixth attempt.  SIXTH ATTEMPT!! 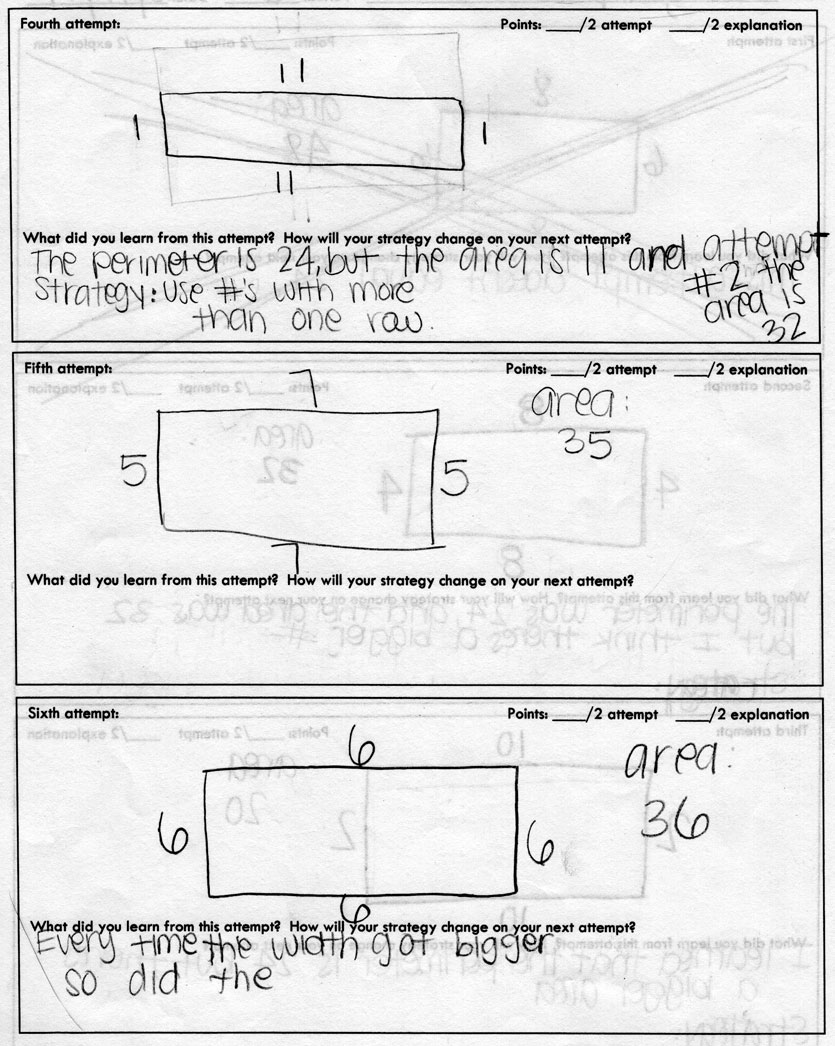 I ended that class by having students reflect on the progress they made over their attempts.  I remember this student beaming with pride as she realized that something she might have given up on previously was actually something she could figure out.  Don’t we want this for all of our students?

This worksheet works best for a single challenging problem that will likely require multiple attempts such as the higher depth of knowledge ones found at Open Middle.  It is not intended to be used for multiple problems that each require few attempts (for example answering a different problem in each of the six attempts).

Do you have any Open Middle Worksheet success stories?  Do you have suggestions for how to make the worksheet even stronger?  Please let me know in the comments.