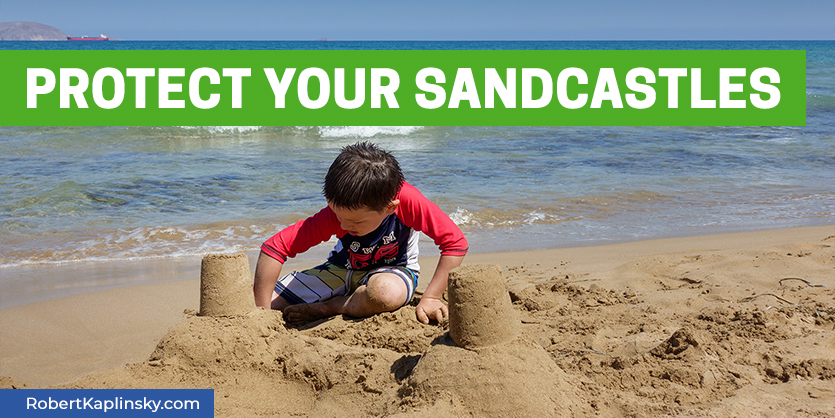 I loved my job as a teacher specialist in Downey Unified School District because I was part of a team that helped students and teachers better understand and love mathematics. Over time, we built relationships and created processes that played a small part in our overall improvement. Clearly not everything we did was successful, but it felt like we were making a difference.

Unfortunately, we didn’t get to see what could happen as many of the programs we created were discontinued by the district’s executive leadership without notice and without input. Decisions like these happened so often and with such disregard that it changed the district’s culture. Eventually I thought of a metaphor to describe how it felt.

Sandcastles
I felt like we were building a sandcastle on a beach near the shore. A lot of love and energy went into building it, and I was proud of what we had accomplished. Certainly, an occasional wave would hit our structure, but it was strong enough to withstand it.

What I didn’t realize was that we had built our sandcastle during low tide and the tide was rising. Soon, the water was much closer and the waves pounded our sandcastle relentlessly until it was gone. Initially we responded by rebuilding our sandcastle, thinking of ways to help it withstand what was to come. Unfortunately, it also was not strong enough.

Eventually I realized that I had only two realistic choices: I could stop building sandcastles or I could build them somewhere else.

I love being a math educator and had no desire to leave the profession, but I also realized that I wanted to be in a place where the executive leadership cared about and respected their people. So, I chose to leave.

Conclusion
I share this metaphor because in describing it to others, they have also found it unfortunately relatable. I’m not saying that every program should continue indefinitely, but top-down decisions made without input from others make people feel unimportant and powerless. Your sandcastle is worth protecting and you deserve to be somewhere where you feel professionally valued and respected.
September 3, 2019