Should We Be Teaching Math The Same Way In 100 Years? 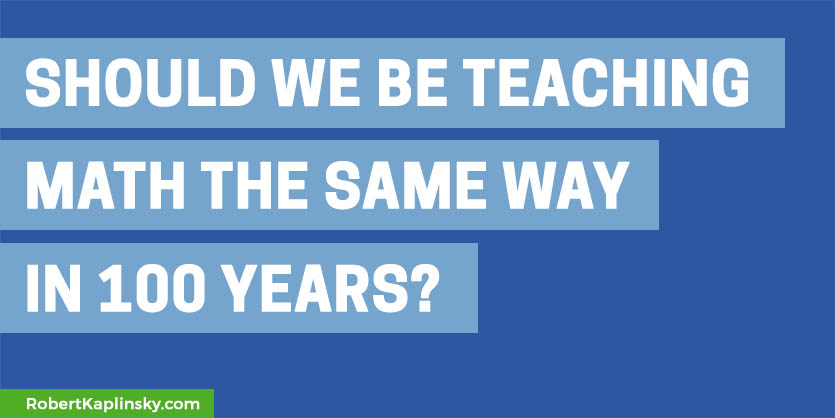 How should the mathematics we teach students change over time? Should students learn the same things in 2020 as they will in 2070 or 2120? What about 2520? I believe that how a person answers these questions depends a lot on how he or she see math’s purpose.

Examples To Consider
As an example, in 1920 calculating sales tax must have been a burden without speedy calculators being commonplace like they are today. Employees needed to know how to multiply decimals efficiently and accurately because there were no viable alternatives.

By 1970 though, as calculators became more common, employees could use this tool to compute the sales tax and instead spend their time considering different problems that used to be so complicated that they were previously unrealistic to do.

For example, consider this story about Lewis Fry Richardson who in the 1920s created a formula to predict the weather six hours ahead of time. The problem was that he had to make so many calculations that “he needed six weeks to produce a weather forecast for the next six hours – and even then it was not very accurate.” So by the 1970s, as calculators and computers became more commonplace, less time could be spent on computing the numbers and more time spent on making better formulas to predict the weather.

Now in 2020, we have a new wave of technology including apps that can instantly solve math problems for us. This is amazing to me because the idea that something like this would ever exist was unimaginable when I was a kid… and it should make you wonder what currently unimaginable innovations await future generations.

Conclusion
It’s frustrating to see so much energy being spent on skills students will rarely use because of technology they carry in their pockets. Simultaneously, there’s so much mathematics that calculators cannot do and students get very little practice with it. I believe that when we revisit our math standards, we need to do a better job of separating what we do because it’s what we’ve always done from what we actually need to be productive members of society.

What do you think? What am I wrong about? What do you agree with me on? Please let me know in the comments.